SafeWork SA reminds businesses to ensure safe systems of work are in place when using free-standing scaffolding to minimise the risk of a collapse. The collapse or partial collapse of scaffolding poses a serious risk of injury, or death to workers and the general public.

On 19 May 2020, approximately 20 metres of free-standing perimeter containment scaffolding collapsed onto a public street during high winds at Murray Bridge. Fortunately, no one was injured, but the risk was high. 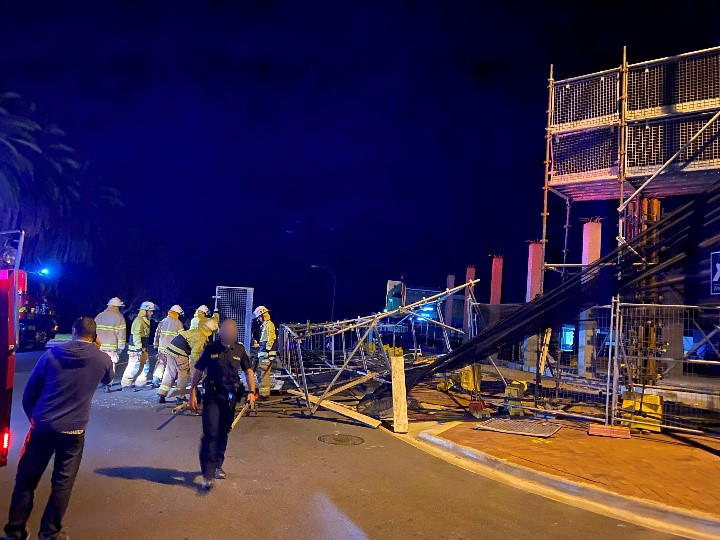 A free-standing scaffold is a scaffold that is not attached to any other structure, yet is stable against overturning on its own account or if necessary, assisted by stabilisers, outriggers, counterweights or buttress bays.

The collapse of a scaffold can cause death or significant injury to workers or members of the public and damage surrounding structures.

The height of free-standing scaffolding must not exceed 3 times the minimum base width dimension.

When perimeter containment screens, shade cloth or signs are attached to scaffolding, environmental loads imposed by wind and rain increase the risk of it collapsing or becoming damaged.

To avoid potential risk to workers’ and public health and safety resulting from the collapse of free standing scaffolding, businesses need to:

The primary objective of scaffold planning and design is to ensure the most suitable structure is used to provide safe access to stable working platforms, ensuring the risk of collapse is managed before, during and after its placement.

The obligation under the Work Health and Safety Act 2012 (SA) is to ensure the safety of workers and any other persons so far as is reasonably practicable.  Everyone in the workplace has work health and safety duties. Some have specific responsibilities for scaffolding, including: